Campanelli Handbell Ensemble is a group of handbell-players. Our musical group of fourteen members, lead by Inna Lai, is located at Nõmme Cultural Center.

Our repertoire varies from peaceful classical music to modern compositions, written especially for handbells. For variety and the expanded demonstration of the possibilities of handbells we often invite singers or other musicians to be part of our performances so that in our concerts you can enjoy musical pieces with the viola, clarinet, trumpet, organ, accordion,  flute,marimba, brass quartet,base guitar or harp. Some compositions are with vocals or Campanelli accompanies a solo singer.

We use two types of bells for creating music – choirchimes which cover 7 full octaves (it takes 73 different choirchimes) in addition to 5 octaves of bronze English handbells (61 bells) and 1 octave CymBells. All 147 bells are chromatic, meaning that one bell responds to one tune, being arranged like keys on piano. The bells are always tuned so no extra tuning is needed. The history of chimes takes us to South-East Asia and China where the first
instruments of this type were made of bamboo. The modern bell-type is quite new both in Europe and in the US. Campanelli ringers use Malmark bells. They are very fragile – that’s why we use soft mats and wear gloves handling our instruments.

Besides playing bells we formed a chamber choir in 2007 with the same name Campanelli to be part of the famous Estonian Song Festival in 2009. The core of the choir is Campanelli bell-players joined by friends and family members – altogether the choir combines 25 members now into a fine and fun group. The initial goal – to be part of breathtaking moments of the Estonian Song Festival in 2009 with 26 000 singers on stage and more than 100 000 people in audience was reached.

Find out more about our group, arrange a musical event or order CDs at

Allow yourself a nice hour with handbell music. 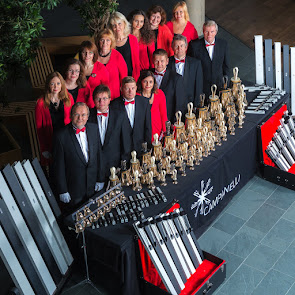